When Billie and I arrived to stay with friends in Melbourne on Saturday I admit I wasn't too excited when they announced what was for dinner. So I opted for the alternative of eating out - we were in Melbourne after all. But when Sunday evening rolled round I decided to take the plunge. I even offered to make it. Stinging Nettle Soup anyone?

Well, I'm now a covert to this fabulous SUPER VEGETABLE, which tastes like spinach and boasts a load of minerals and vitamins, including iron. In fact it's more than that. Stinging nettle has been used for many medicinal purposes by many different peoples for many, many years. To learn more, check out this Canadian article: WONDER PLANT . Or for some quick facts: stinging nettle on wikipedia

Stinging nettle of course stings when fresh and raw (soaking, cooking or drying remove the stings) so please note the rubber gloves.

Sourcing this hardy weed may require a rummage in your local forest or garden. If you're in Melbourne, head to Ceres  -  Centre for Education and Research in Environmental Strategies

It was by accident that Emily and Andrew wound up with an armful. Blame 6-week-old baby Oscar. By the time the new little family made it to Ceres Saturday organic markets, the cupboards were bare. Except for some lonely stinging nettle.

When Billie, Emily, Oscar and I walked back to Ceres on Sunday for lunch at The Merri Table and Bar, serving delights straight from this urban farm, we suddenly saw stinging nettles everywhere along the Merri Creek route. But we're sure Ceres grows its own.

This easy, yummy soup was adapted from one sourced online, Stinging Nettles Soup, but there is another version that looks pretty good included on the Wonder Plant link above which I may try next time we stumble across some stinging nettle. 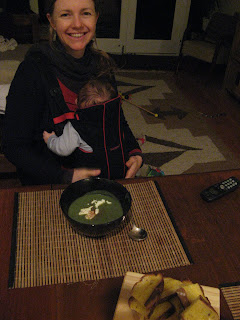 2 T butter
1 onion, chopped
1 pound of potatoes, peeled and chopped into small chunks
1 large bunch of stinging nettles (handle with gloves)
5 cups vegetable stock (homemade better obviously but we used 2 cubes dissolved)
1/2 t nutmeg
1 t salt
generous amount freshly ground black pepper
cream (optional)
yoghurt (optional but encouraged - we only had yoghurt in stock)
Chop and peel potatoes. Chop onion. Melt one tablespoon of the butter in large saucepan with heaby base. Saute onion until soft. Meanwhile, get hot stock ready. Add to pot with potatoes and bring to boil. Turn down and simmer WITHOUT LID for 15 minutes. Meanwhile wash and trim nettle (with  gloves). We used stalks and all but I would suggest removing most of the stalks to avoid a stringy soup. Add nettle to pot and simmer for 10-15 minutes. Blend well and reheat with cream, if using. Serve with generous dollop of yoghurt and some decent bread/toast. And yes, Billie liked it - with plenty of toast of course.
Posted by Billie Bites at 1:50 PM