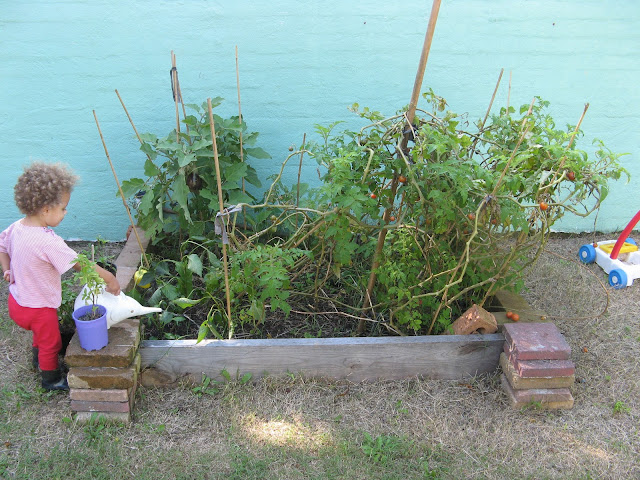 I've bragged about our backyard organic cherry tomato supply - now not looking so hot after a lot of rain, a drop in temperature, a lack of sun and perhaps under-nourished soil. 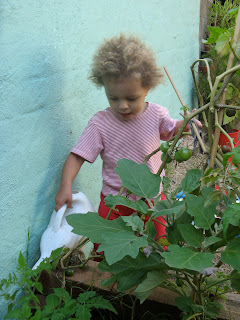 However, now that the tomato plants have calmed down, the aubergines and peppers are getting a chance.

I was amazed to return from a ten-day holiday to find a large aubergine/eggplant and several smaller neighbours, mostly on the same laden plant. One is looking very purple and ready for vegetarian moussaka.

But only one pepper/capsicum has materialised from a handful of fairly large leafy pepper plants. Not sure what went wrong there - research required.

Overall though it's been very satisfying growing all this food from seed. Billie has been a fantastic little helper throughout. 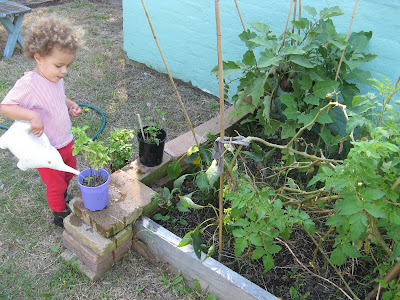 I've been waiting patiently for this sole pepper to turn red, but today Billie and I noticed the garden fauna was not being quite so patient. An ant was nibbling away inside a hole presumably left by a worm.

So Billie did the honors and appeared to get great satisfaction from pulling the yellow capsicum off the plant.

I only wish she would show so much enthusiasm when it turns up on her dinner plate tonight.