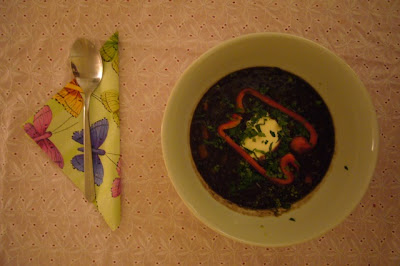 It's the season to be soupy - if you're down-under at least. I made some fantastic soups this week. They didn't just taste it, they looked great too - often an issue with soups that wind up a dull brown or grey.

I have made various versions of black bean soup over the years, but usually they are blended to a thick blackish puree. While tasty, I have felt a little odd gulping back black goo.

This hearty ensemble is a departure from that blended style and quite impressive to serve up: Soft black beans in a dark purple broth alongside strands of red pepper; with a generous dollop of sour cream, sprinkled with shavings of lime rind and fresh coriander leaves.

I adapted this recipe from a soup based around a bacon hock. I wasn't sure if a vegetarian version would cut it, and maybe it wouldn't if you had tasted the meaty version.

Billie had no complaints, and neither did my blog pal Violet Tingle. I took it to her place ahead of a Friday night blogathon. Alas, Blogger was down and so was Ms Tingle's internet. So we just ate soup. Bread is not needed but it pals well with lager. 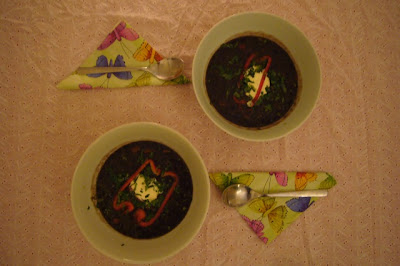 And don't dare leave out the sour cream. If possible go for a good quality version that is literally soured cream and therefore quite runny. (If you're in Australia this means Barambah - and I'm not being paid). 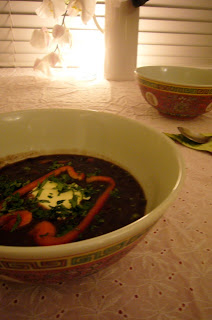 (Adapted from a Julie Biuso recipe)


Garnish:
sour cream
extra chopped fresh coriander
one lime to zest and juice
the red pepper pieces from above


Rinse black beans and soak in 7 cups of cold water - for about 8 hours. Drain and rinse.


Heat oil in large pot and saute onions and then garlic over a low heat for about ten minutes or until soft. Add spices, followed by beans and 3 litres of water (just 1 litre if beans already cooked in pressure cooker) with a dissolved stock cube, the bay leaves and black pepper. Bring to boil, add parsley and lower heat. Simmer with lid off for two hours or until beans are very soft.


Place in bowls and garnish with a spoon of sour cream, some red pepper, coriander and lime zest. Squeeze a generous squirt of lime juice over the top - this tastes great and gives you some extra vitamin c to absorb the beans from the iron. The red pepper will do this also.

NOTE FOR PRESSURE COOKER USERS: If you have a pressure cooker you can reduce soaking and cooking time substantially. Soak beans for a few hours and then place in pressure cooker with 5 cups cold water and cook for 15 minutes once up to pressure. They don't need to be fully cooked as will continue to cook in the soup. Meanwhile, get the broth going - but use 1 litre rather than 3 of additional water. Add the beans and their cooking liquid to the broth and simmer down for 45-60 mins with the lid off.