I've just realised that I don't have any photographic evidence of these delicious Blissed-Out Balls, despite making them twice. Oh well, I'll just have to whip some more up tonight for the camera. As good an excuse for sweeting (making sweet food that doesn't require baking) as any I would say.

The inspiration for these came from: a) some balls marketed as Bliss that I purchased from our local health food store - no idea who makes them so I can't give any credit where it's due
and b) some recipes I used to make with high school friends on desperate Saturday nights when there wasn't any chocolate in the house.

One of those friends has been asking for my 'barfi' recipe lately - which is a bit different as I think it involved cooking up milk and setting it - but so far I haven't been able to locate it. So Kura, give this a whirl, it's more like the balls we used to make with butter and sultanas, only MUCH HEALTHIER.

No butter. No Sugar. No gluten. Just good old milk powder. The important ingredient to get sorted is COCONUT OIL. It's that translucent fat the consistency of ghee that you find in most health food shops these days. It shouldn't be expensive - although some will try it on cause it's newish and all.

I was a bit concerned these bliss balls may not meet everyone's taste. However, I made them for our office Food Club and they got the thumbs up from a variety of palettes. There was even a bit of discussion about who could have the last one. I think they passed the test. 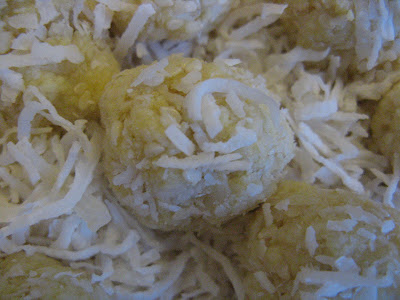 RECIPE: BLISSED-OUT BALLS
1 teaspoon vanilla
3/4 cup dessicated coconut
2 T sesame seeds
3/4 cup milk powder
3 T coconut oil
3 T honey
ground almonds for rolling (or use extra coconut)
Melt coconut oil and honey in small pot over gentle heat. Remove from heat and mix rest of ingredients through quickly.
Wet your hands with hot water and roll in teaspoon-full balls, then coat with ground almonds, or coconut. It's worth rolling them into nice round smooth balls as they can look a bit weird with a rough job. Unless you're planning to eat them yourself right away.
Place on plates or tray in a single layer and place in fridge to set. Store in container or jar in fridge, but remove from fridge a few minutes before serving.