There's nothing more satisfying, in the kitchen, than serving a pie hot out of the oven. Particularly a perfect pie. Last night we marveled at it for several minutes before tasting. And yes, it tasted even better than it looked. Billie devoured hers. 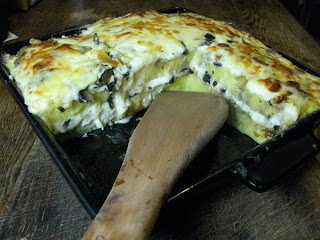 If you're expecting pastry here you may be disappointed. In my world there are many types of pie, and the pastry version is just one - albeit one of my favorites.

Not everyone sees it this way.  When a friend visiting last year from Chicago arrived for dinner he said he was very curious about "this pie" I had promised. When Brian saw the polenta tomato bake he laughed and said, "that's not a pie". In the United States pies are usually sweet, or if they are savoury they are called pot pies and normally contain chicken.

As my first attempt at her recipe I was rather pleased with the result. Especially at my new discovery that polenta can take on a bit of a sponge cake look and feel if done like this: I doubled the water,  cooked it for longer but importantly poured into trays while still runny. So the finished product was much lighter and airy. I've turned over a new leaf - I will always make polenta for pies in this way. MUSHROOM POLENTA PIE
250g polenta
2 litres water
1/2 tspn salt
70g butter
6 T flour
500ml full cream milk
salt
freshly ground black pepper
freshly grated nutmeg
1 cup freshly grated parmesan cheese
large knob of butter
300g mushrooms, sliced
First make the polenta (this can be done ahead of time). Grease the oven dish, 30cmx30cm or equivalent. Also grease a second tray (can be plastic, as not going in oven). Bring the water to the boil, then sprinkle in polenta, stirring as you go. Turn heat down to very low and stir until thickened, but still quite runny (you should NOT  be able to stand a spoon up in it). Pour half into greased oven dish and other half onto tray, so both are about the same size. Smooth over and leave to set.
Preheat oven to 220c. Meanwhile, melt the first lot of butter in small pot and add flour. Gradually add milk, stirring constantly. Bring to the boil, stirring all the while. Turn to low and simmer for one minute or so, still stirring. Remove from heat and add pepper, nutmeg, 4 T of the paremsan and 3/4 tspn salt. Cover and set aside.
Heat large frying pan on high and add large knob of butter. When melted, add mushrooms and cook on high for a few mins, until lightly browned and liquid absorbed (mushrooms produce quite a bit, and need to be cooked on high to avoid just going soggy). 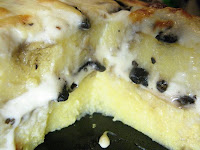 Time to layer up. Spread half the mushrooms on top of the polenta in the oven dish. Cover with half the bechamel sauce and half the remaining parmesan. Place the other slab of polenta on top, followed by the rest of the mushrooms, sauce and finally cheese.
Bake for 30 minutes or until golden and bubbling on top. We ate it both nights with steamed French green beans. Anything green would do though. And it reheats in the oven very well.

Did someone mention a birthday? Well, little Ms Billie turned 8-months today. To celebrate, she had her first cracker. I was impressed how swiftly she got rid of it. Without any choking noises. And they were crunchy crackers. 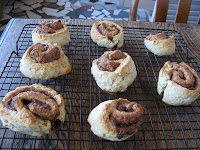 But later at the park with friends she noticed she was missing out on the celebratory pinwheel scones. She's a fast mover. In a split second she grabbed one-year-old Henry's piece of scone and almost had it in her mouth. But her mother foiled her sugary grab and handed her back a bite of scone minus the sugar filling. Billie didn't notice what she wasn't missing.

This is an easy old classic, you can play around with the size and amount of sugar/butter/cinnamon filling.


First make a basic scone dough. If you don't have your own try this. The key to scones is speed. Don't start until the baby is asleep. 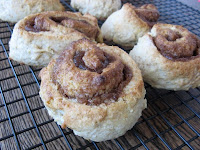 250g self-raising flour (a mix of white and wholemeal)
40g butter, at room temperature - or soft
pinch of salt
150 ml milk
a little extra flour
Preheat oven to 220c. Grease a baking sheet or tray. Sift flour into bowl, add butter and rub with fingers to combine. Add salt and then use a knife to mix in milk gradually. Flour hands and knead into a ball - it should be very wet, but not so much that you can't handle it. Add little more milk if necessary. Roll dough out on a floured bench or board and roll thinly - about 30cm x 20xm.
Now spread cinnamon mixture fairly evenly over dough, leaving about 2cm uncovered on long side away from you. Wet this with water then roll tightly, finishing with wet edge so sticks. Slice into eight pieces, place on tray and bake near top of oven for 15 mins or until lightly browned top and bottom.
Cool on wire rack and eat as soon as possible. No butter, jam or cream needed. Just a nice cup of tea. 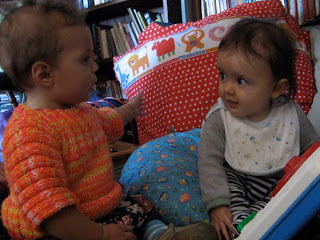 Billie and her fellow-8-month-old friend Marilla
Posted by Billie Bites at 10:43 PM