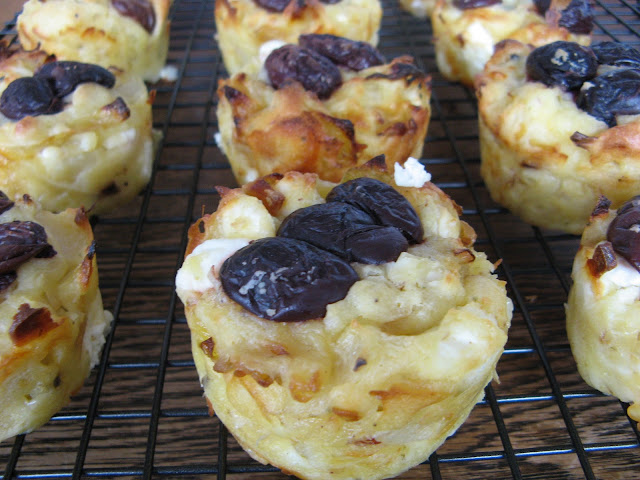 A few weeks back I made a promise. Now, after a few crazy weeks at work, I am delivering on that promise.

These are the little savory pies I served at Billie's second birthday party. This weekend I pressed replay for a friend Miream's shared lunch. They were devoured around a crowded kitchen as mountains of delicious food was served.

I have slightly adapted this vegetarian recipe from Julie Le Clerc's feta and olive pies in her Cafe@home book. Julie uses the mixture to make a few small pies. Instead I divided it into 12 muffin tins.

At Saturday's lunch we had some gluten-free folk so I swapped the regular flour for a gluten-free one. It worked just fine.

Unfortunately Billie's experience of these tasty pie/cakes was tainted by her false expectation that they were sweet muffins. She mistook the olives on top for dates...and we all know how her taste buds would have reacted. 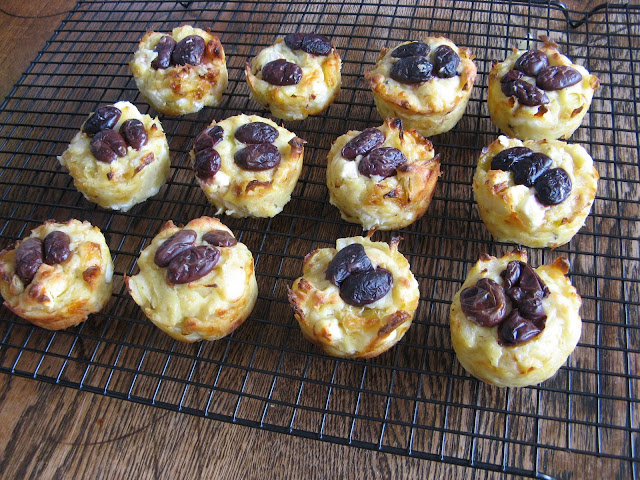 RECIPE: CHEESY YOGHURT ONION OLIVE CAKES
3 onions, sliced thinly
1/4 cup olive oil
1 cup self-raising flour, or 1 cup gluten-free flour and 1 tspn gluten-free baking powder/soda
3 large eggs, lightly beaten
1 cup thick plain yoghurt
300g feta, cubed
1 cup freshly grated Gruyere cheese
3 tablespoons chopped fresh dill
black pepper
1/2 cup kalamata olives (remove pits, but avoid cutting in half, before using)
Saute onions in oil for ten minutes to soften well but not brown. Remove from pan to cool. Preheat oven to medium - about 180/350. Oil 12 muffin pans.
Sift flour into a bowl and make a well in the middle. Pour beaten eggs and yoghurt into the well and stir with a wooden spoon. Mix in onions, feta, Gruyere, dill and pepper. You don't need to add salt as the feta has plenty.
Pour into oiled muffin tins and place an olive or two on top of each. Bake for 30 minutes or until set and browning on top. Let them cool a little before removing one from the tins. If still quite wet and difficult to remove, pop them back in oven for few more minutes.
Cool on wire racks or serve immediately. Great fresh out of the oven, but at Billie's party they were cold and still delicious. 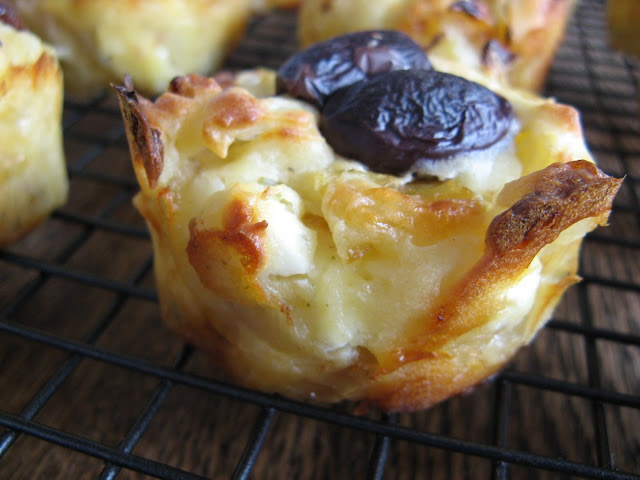