Where there are risks there are often rewards - and the kitchen is no exception. 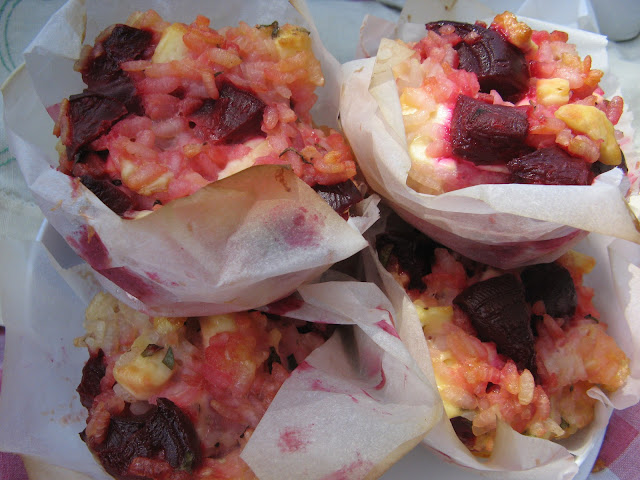 This was one of those creations where going into the oven a few deep breaths were taken. And there was no opportunity to taste test when they were removed - the pink and white savories had to be immediately bundled into a container and whisked into the stroller for a run to the train at Bondi Junction. 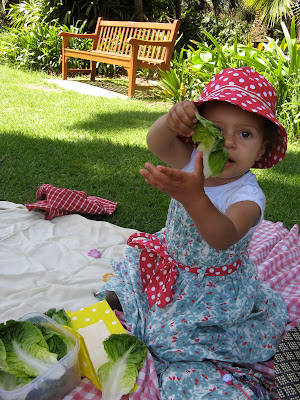 Thankfully they were the hit of the picnic. Until we got to dessert. Well, there were only three of us, counting Billie, so I confess there wasn't much competition. But Jodie is a fine cook with fine tastes, so her opinion is probably worth five.

Now you might say, well you've done rice cakes before (pumpkin), and beetroot and feta are such good team mates that there's hardly a surprise that this concoction worked. All true. But still, these tasty and nutritious vegetarian picnic fodder don't just work. They are fabulous.


A NOTE ON RICE CAKES: I have had a couple of complaints from readers who made the pumpkin rice cakes a few months back - yes, they got stuck in the tin.
Well, I am very happy to share with you all my recent innovation for cooking all things involving muffin tins: baking paper.
Simply cut small squares/rectangles of paper and line muffin tins. Lightly oil tins first so paper sticks. Will look messy and have lots of folds and creases, but the muffins/rice cakes come out easy as pie, and your tins are left clean as a baby's bottom. And you avoid soaking up chemicals from the Teflon coating. 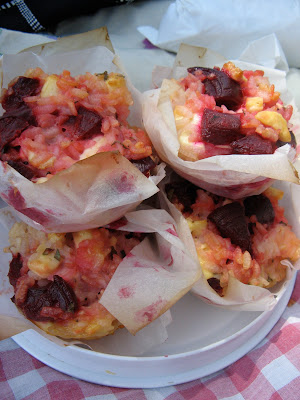 Bunch baby beetroots - about 4-5, or 2-3 regular beets
1 cup arborio rice, or other Italian
1 block feta, chopped into small pieces
5 eggs
handful fresh oregano, finely chopped (optional)
salt and pepper
butter
First prepare beets: Wash and cut leaves off but make sure you leave some of the stalk on, and all of the tail. This prevents the juice leaking during cooking. The best was to cook beets is in a pressure cooker - half cover beets with water and cook for 20 minutes once at pressure. Otherwise steam them, or roast in oven until very tender. Remove and set aside to cool for few minutes. Gently remove skins by slicing off stem ends and tails - the skin should then slip off easily. Chop into small pieces, about one inch.
Meanwhile, place rice in small pot filled with water and a dash or two of salt. Bring to a simmer and cook with lid off for a further 10-12 minutes, or until just soft to the bite. Strain and stir through a knob of butter.
Heat oven to medium-hot. Prepare muffin tins as above. Chop feta into tiny cubes. Beat eggs in large bowl and add rice, oregano, feta and freshly ground pepper. Gently stir through beets. Spoon into muffin tins and bake for 20-25 minutes or until golden.
Remove from tins by holding onto corners of baking paper - another reason not to bother with perfect circles - and place on wire rack to cool briefly. Serve hot, or luke warm at a picnic in the park. Cold will pass too, Billie assures me after she ate one later for dinner on Saturday. 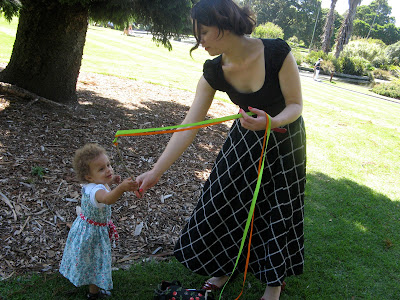 Our Botanic Gardens picnic was a special event - Billie's first outing of a dress complete with matching hat and HANDBAG given to her by Jodie when she was just one week old. Don't you wish you had such an outfit... 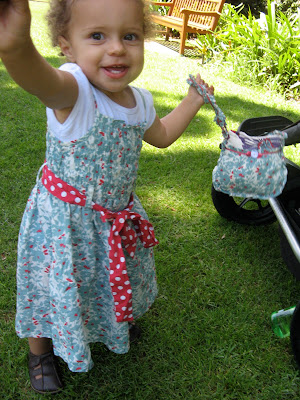 I had been delaying introducing the handbag but Billie has independently developed a love of all things handbag-like, to the point where we were concerned she would strangle herself wrapping the long straps around her neck. So out came her own little bag with its much shorter strap.

But Jodie turned up with another present for Billie - this time a hungry caterpillar bag. Of course the pretty ribbon wrapping was the instant hit. 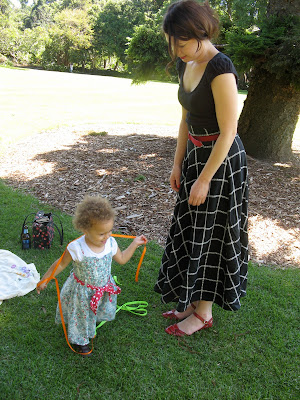 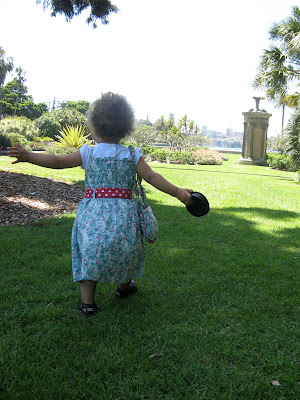