SPINACH AND CHEESE STUFFED POTATOES and A SPECIAL REQUEST 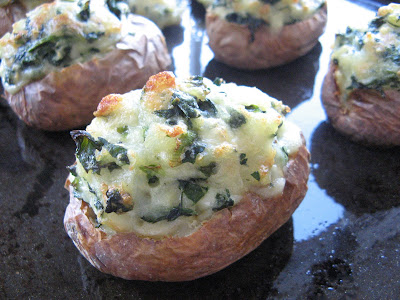 One of my fondest memories of intermediate school (junior high, year 6) is learning to make stuffed potatoes. I then made them for my family a few times as I progressed from baking to cooking actual meals.

But stuffed potatoes have been left behind in my culinary adventures of late. Until last week when I was a little, ahem, in need of stodge after too much fun at the work Christmas party.

And actually, with the addition of plenty of spinach, these potatoes are not just tasty but nutritionally sound.

I can't report back on how Billie fared as Miles and I didn't manage to save her any. But I'm sure she would approve. 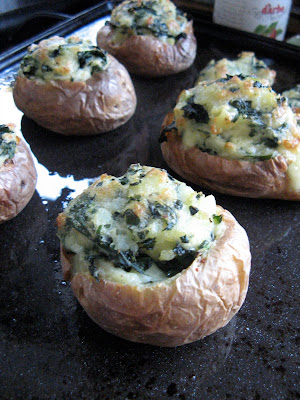 1 spring onion, finely chopped
1/2 bunch spinach
1 cup grated cheddar
butter
5 medium potatoes
salt and black pepper
Bake potatoes in a preheated moderate to hot oven until done - about 30 minutes for medium potatoes  or 1 hour for large potatoes. Pierce skin with fork or knife before placing in oven.
Meanwhile, wash and drain spinach and place in large pot with a knob of butter on medium heat. Shake or stir every minute for five minutes, or until just wilted. Place on board to cool and then chop.
Carefully slice tops off potatoes and scoop flesh out into a large mixing bowl. Take care not to pierce skins - better to leave a bit of potato in bottom to be safe.
Mix potato flesh with grated cheese, a few knobs of butter, spring onions, spinach and pepper. Add a little more salt if necessary.
Spoon mixture into potato skins, packing it in and over filling a little until all mixture used up. If you have any leftovers, spoon onto the little potato lids and place on tray next to stuffed potatoes.
Bake in oven until browned on top - about 10 minutes. Check heated through before removing and serving.
FOR BABIES 6 MONTHS AND OLDER: Mash up some potato and pureed cooked spinach
FOR BABIES 9 MONTHS AND OLDER: Reserve some of the stuffing before butter and salt added
FOR TODDLERS 12 MONTHS AND OLDER: Serve whole stuffed potato 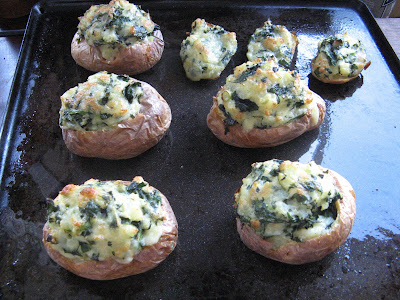 And now for something completely different...
I do love a request. So despite there being no photographic evidence, and despite this being similar to other dishes I have presented on these pages, I can't resist. I took this salad to a lovely lazy Sunday BBQ at Cath's place the other week. I didn't record the measurements so I hope I get this right. Here you go Cath:
BEETROOT AND LENTIL SALAD WITH GOATS CHEESE
Bunch baby beet root, or couple of large ones
1 cup French Puy lentils (those small black ones), or regular brown ones
Handful of spinach leaves, washed and drained and torn if large
Dressing:
3 T olive oil
1 T balsamic vinegar
Juice of a lime
salt and black pepper
1/2 cup walnuts, chopped
First cook the beets. Steam or roast whole. DON'T remove the skins or tails, just chop off the stalks, but leave a bit on as you will remove them later with the skins. This stops the beets bleeding. If you have a pressure cooker, cover about half the beets with water and cook once at pressure for about 20 minutes.
Meanwhile, cook the lentils. Rinse first then place in small pot with a cup of cold water. Bring to gentle simmer with lid on, and cook gently until just soft. Check during cooking and add more water if needed. Particularly if using the Puy lentils, be careful not to overcook until mushy. The beauty of these lentils is their texture.
Prepare dressing. When lentils are cooked place in large bowl and gently stir dressing through.
Cool cooked beets and remove skins and tails etc. Chop into large chunks and add to lentils. Add walnuts.
When ready to serve, add spinach and then gently combine sliced goats cheese.
Posted by Billie Bites at 1:31 PM