WELCOME BACK, TO A BUMPER CROP

We were very excited to return home, from camping on the NSW Far South Coast, to find a blooming vegetable garden.  The frequent rain showers sprinkled between hot sunshine in Sydney gave our little veggie patch a much-needed boost. Before we left I was stressing that gardening was all about the PROCESS, ya know. Watching those SEEDS sprout and mature and survive the great transplant. Well, now I can happily revise that. It's feeding us too - a little. 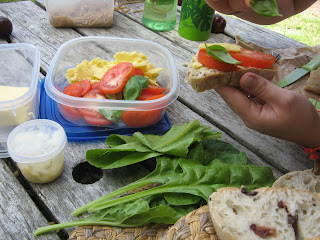 Our first garden feast featured spinach, lettuce and basil from the no-dig garden we created in late October. Gardening partners Emily and Henry Besser (Billie's best mate) brought bread and tomatoes, and the best sandwiches I have eaten all decade were had. And only a metre from where the seedlings grew.


Soon to come on the garden menu will be tomatoes, aubergine/eggplant and red pepper/capsicum followed by courgette/zucchini. Dill seedlings are thriving. I have also impressed my neighbor Lauren (who kept a close watch over the garden while we were camping) with some coriander seedlings. They did take a couple of attempts. Thanks also go to Miream for the lettuce and courgette seedlings, brought to life down the road in Randwick. 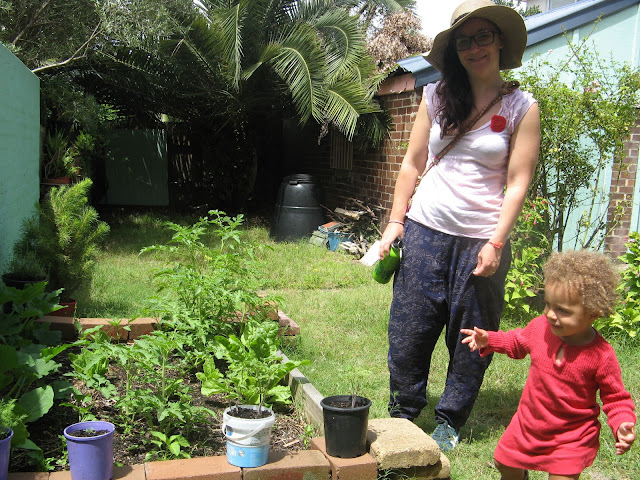 When Emily, Miles and I built the no-dig garden in the spring, we simply followed some directions pulled off google - layering up with newspaper, straw, manure and a bit of dirt and compost. We omitted the hay because it was impossible to find in Sydney. We should have used cardboard because the weeds are very feisty.

Next we planted seeds in egg cartons, sat them in old plastic takeaway containers on my sunny kitchen windowsill, and delighted in their speedy growth. All was fine, except I left them too long and many dried out and died. A couple of the spinach and tomato survived and are now huge. But the next batch of seedlings I transplanted after just a week or so. Coriander can't seem to survive transplanting so I stuck the whole egg carton straight in the garden once big enough to cope outdoors. The dill seeds I planted in a plastic pot, after the first batch failed to transplant.


I learned from a little organic gardening workshop mid-way through that our seedlings were struggling for lack of fertiliser. So they have since benefited from a fortnightly does of a seaweed concentrate and another organic mix that contains nitrogen.

So it's been a learning journey, and we're still very much novices. But that doesn't stop us screaming from the roof-tops: WE ARE GROWING A BUMPER CROP IN OUR LITTLE VEGETABLE PATCH!

Today I will make our first home-grown salad to take to lunch with Giles and Anna and Bruno at Giles' art studio. Of course I'll wait until we're about to leave before picking the spinach, lettuce and herbs so I can shout ONE HOUR OLD VEGETABLES  ON YOUR TABLE! 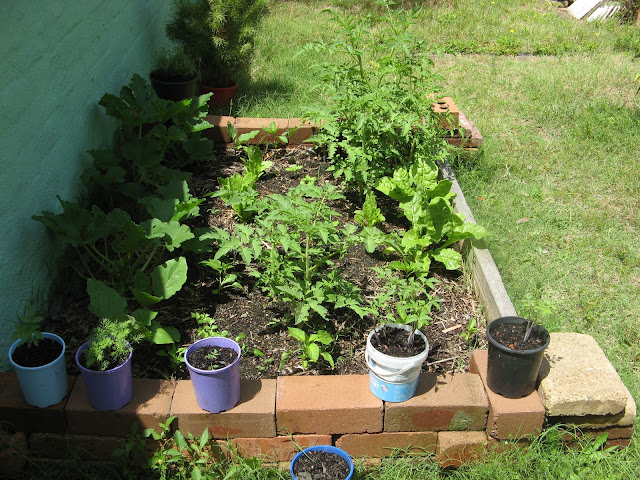 I've just been listening to a re-run of a great discussion on vegetarianism. ABC Radio National looks at the growth in popularity of vegetarianism, as more people question what they're eating and the environmental cost of producing it. The show debunks some nutritional myths about a meat-free diet with Dr Rosemary Stanton.  Check it out:  Vegetarianism on ABC Radio National's Life Matters
Posted by Billie Bites at 11:06 AM